To continue my tour of my hangings on the wall.  I must admit I am enjoying this perambulation through my recent history.  It is bringing up some lovely memories of recent times past after I retired from that miserable skunking scene that was Manchester all of 16 years ago.  Congratulations to Ma Femme for suggesting I live the past, a grand woman with a big heart as well as gigantic balls. 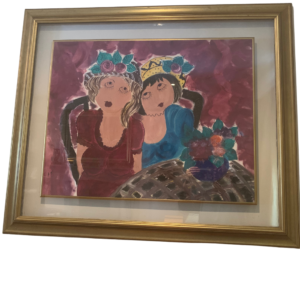 No 12 – This piece is interesting, it belongs to Ma Femme, she liked it that much she hauled it 14250 kilometres to Boyle from Port Elizabeth.  It is a watercolour by an unknown artist in the style of Beryl Cook showing two well fed blousy ladies of median age enjoying a tete a tete.  She bought it in a sale of paintings reduced from 1500 rand to 750 which was half her monthly salary at the time.  The image is amusing and the construction interesting.  It fell off the wall a while ago smashing the glass and damaging the frame.  We took it to the local picture framer who scratched his head for a while until he discovered it consisted of two glass frames with the image sandwiched between.  He had never seen the like.  “The bloody Zulus!” he said but he reinstated it beautifully. 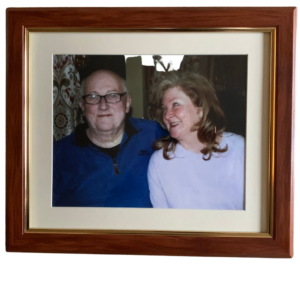 No 13 – This is a photograph of me and Ma Femme at the dinner table in the Abbey Glen Castle Hotel.  The best hotel in Clifden in Connemara on the Sky Road out of town.  I think it shows how happy the two of us are in each other’s company.  I probably give the game away too much. 2019. 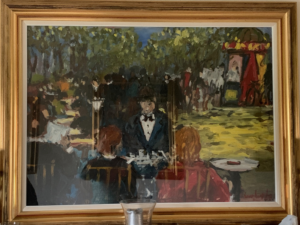 No 14 – Another magnificent large piece by Marie Carroll in her impressionistic best entitled “Al Fresco”.  Myself and Helen were walking along Duke Street one lunchtime towards Dawson Street after having partaken of pints of Guinness and plates of oysters in Davy Byrne’s pub when my eye was taken by the colours of this fairground image as it stood in the window of the Athena Gallery.  We went in and bought it.  One problem we told the Old Queen who ran the shop, we lived in Manchester and had no transport.  “No bother,” he said, “I will have it over to you next week”.  He did in a van that called a few days later.  Magnificent service we thought, the year was 1999.  As I said before, Marie Carroll sadly died in 2016 leaving a hole in the Dublin pictorial landscape. 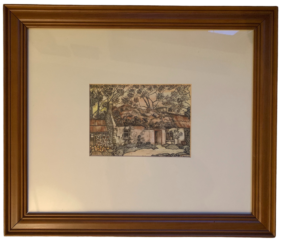 No 15 – Another of Beatrice W Chapleo’s ink and watercolour pieces entitled “A cottage in Fermanagh” showing a traditional thatched cottage with two corrugated off shoots.  I bought this at the Boyle Arts Festival in 2008.  It reminded me so much of the home Helen was born in, in Shaskin, near Rooskey in Co Maygo and the place where we scattered her ashes on that cold February morning in 2017 fortified by Mr Martel who brought his wares all the way from Cognac in the south west of France.  I call it Maygo because nobody knows what county they live in round there.  A wild desolate place that has been left to the wild life and elements. 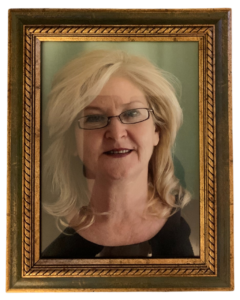 No 16 – Another photograph this time of Ma Femme showing what a beautiful lady she is.

Now into the kitchen for… 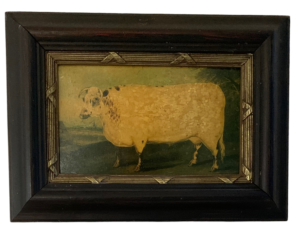 No 17 – A 19th Century print of a cow.  It suits its location, ready for the butcher, the oven and my stomach.  Artist unknown. 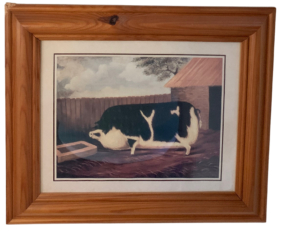 No 18 – Another 19th Century print of a pig looking nothing like the sleek beasts of today.  This animal would be a true feast when killed.  Artist unknown. 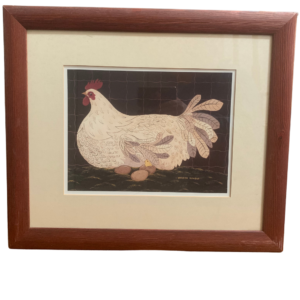 No 19 – Another 19th Century print showing a lovely fat hen on a clutch of eggs, artist Warren Kimble.  These last three prints I picked up in various shops over the years I have a few more in storage under the stairs I remember the kitchen of our old house in Clifton Road was full of such as these.  They sharpened the appetite and gave Helen suggestions for the menu.

Now into the hall. 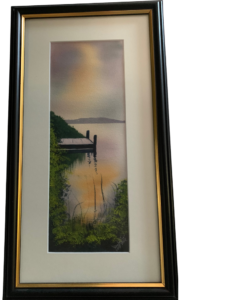 No 20 – A very capable watercolour by Ballina artist, poet and polymath Jean Folan showing a lakeside jetty.  She took up watercolour painting in her late 60s as an aside from the pain of a damaged foot.  We swapped paintings some years ago.  I gave her one of Julie Potter’s, the daughter of Paraic Potter, the Sligo painter and musician, more for her early talents than anything else. 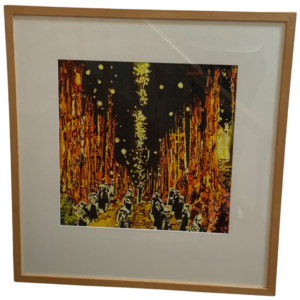 No 21 – A very exciting watercolour, pen and ink image entitled “East St Louis -Too-Del- Oo depicting a large jazz band marching down a long boulevard in St Louis at Mardi Gras.  I bought this at the Boyle Arts Festival in 2007.  Liam Ryan, the artist, was born in Dublin in 1982 and won the Dublin Society Taylor prize in 2006 whilst completing a BA in Fine Arts  at the National College of Art and Design.  He won Lismore Castle Arts Scholarship in 2008 and attained an MA in Fine Art at Byam School of Art in London.  He now lives there and has had exhibitions in London, Dublin, Shanghai, Beijing, Belfast, Derry and Limerick in the past few years.  A man of recognised talent. 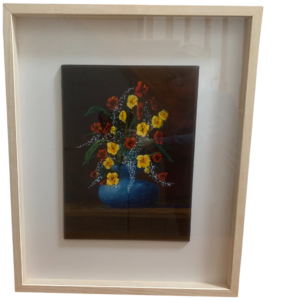 No 22 – A pretty oil painting of a bowl of flowers set in a box frame by Michael Ewing, the celebrated picture framer from Knockvicar.   Title is “Still Life”  painted by Pam Cunningham of Heaton Chapel, Stockport which I bought in an exhibition in Stockport in1997

These next three pieces are by Dublin artist Pete Hogan, who sells his stuff off the railings every Sunday in Merrion Square in Dublin.  He draws images of everyday life and characters in Dublin.  A keen sailor who built his 30ft ketch in Vancouver as a young man in the early 1980s and eventually sailed it down the west American coast, through the Panama Canal and over to Ireland.  Having found a wife he sailed the Molly B (after Molly Bloom, the saucy lady of Joyce’s Ulysses) around the world and on a later date sunk her in a storm in the Gulf of Leon in the Mediterranean.  Lucky to be rescued by a passing merchant vessel, he returned to Dublin wrote of his travels and gave me a copy “The Log of the Molly B”.  A great man and a wonderfully exciting book.  Go and see him any Sunday, his paintings and sketches are very affordable and certainly make me ponder on my past. 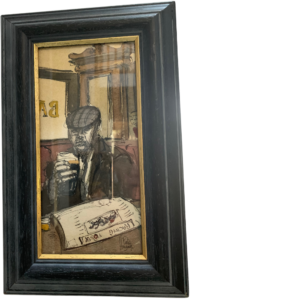 No 23 – A watercolour and sketch of a working man sat at a bar in a Dublin pub reading the newspaper and drinking a pint of plain entitled”Pint And A Bet”  I have often been in that position, thinking of life, catching up on time and taking time away to let it catch up with you. 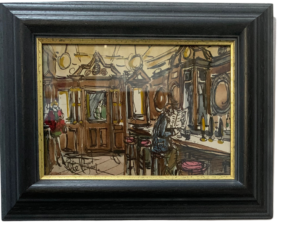 No 24 – A watercolour of a typical well-furnitured pub in Dublin where the joiner and architect had a field day. 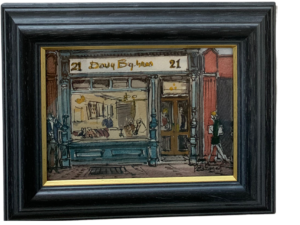 No 25 – Another Hogan watercolour of the front elevation of Davy Byrne’s pub on Duke Street in Dublin.  This pub is famous for its appearance in James Joyce’s Ulysses when Leopold Bloom stopped to quench his thirst on his 24 hour stroll around Dublin.  Years ago I knew the manager there.  He was the first cousin of an employee of mine from Newport in Mayo.  Helen and I were out shopping one morning and about 10,30am the drouth was on me, so we knocked on the closed door of this establishment.  My acquaintance answered and told us that they did not open until 11.00 am but he said: “come in and have a drink whilst you wait”.  We did and had three and washed down a plate of oysters as well.  The story goes that the Behan family, painters but not artists of distinction except perhaps of the piss genre, decorated the place at some stage.  After leaving this establishment we walked up to the Athena Gallery on the corner and spotted Marie Carroll’s fairground extravaganza.  The story is history and explained previously.  Now looking back I feel I was part of Leopold’s walk. 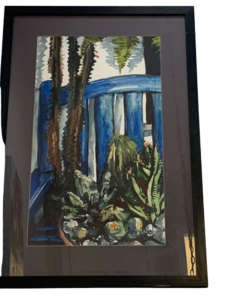 No 26 – And high above the front door are two of Annabel Langrish’s specials.  The first is a still life of a garden chair, entitled “Blue Chair” with vegetation in masses growing around it.  The blue of the chair is wonderful and many an observer has mentioned it. 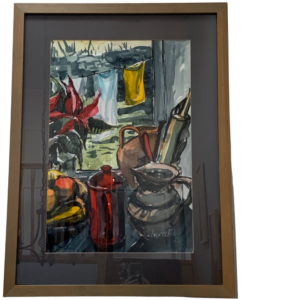 No 27 – This is a view taken by Annabel through her kitchen window into the garden of the old farmhouse where she lived in Corrigeenroe entitled “Out The Window” again the colours are great.  Corrigeenroe is a marvellous little village at the top end of Loch Ce where my youngest son spent a year in the quaint little village school later his five nephews and nieces tarried there.  It means in English Little Red Rock.  Both No 26 and 27 I bought from her farmhouse/studio in the village. 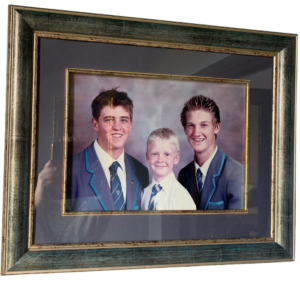 No 28 – This is a photographic portrait of Ma Femme’s three good looking sons aged 17, 14 and 7 taken about 20 years ago when they were at school in Port Elizabeth and about to suffer the divorce of their parents.  Good for parents but not for kids.  The oldest now lives in Toronto, the middle one in Dublin and the youngster is struggling in Pretoria in wild west South Africa.  The situation there is dire with the ANC government unable and unwilling to stop the slaughter of white folk and the destruction of the agricultural community.  White South Africans get out if they can, Ireland is full of them but most cannot.  Those that do want to get back there, the country is such a lovely place only spoiled by idiocy and racism.  The black majority might have a point the way they were treated in colonial times but in this 21st century, memories have to some extent to be forgotten.