In these Covid-infested times when life is bleak and relationships can turn sour unless carefully nurtured and massaged (and plenty of that please), we need to think of the past pleasures.  Life’s enjoyment has stopped, possibly forever so we need to rekindle all those lovely things that made life worthwhile.

I for my part loved cricket, enjoyed a good football or rugby match and tried to tend to my burgeoning family, with little success unfortunately.  However, the real, secret and wonderful pleasure that I gleaned from my lonely moments was the appreciation of art.  I am no expert, no bluffer.  I cannot pull meanings and secrets out of crap art but I love colour and draftsmanship.  I love a subject that is close to my heart and it came as a pleasant surprise when Ma Femme said recently why did I not catalogue my collection giving a story behind each piece?  So here goes my catalogue in blog form and hopefully Daughter No 2 will photograph each piece and add to the story.  There is no real reason for the numbers, I have just started at the back door and toured the house but Ma Femme’s system of movable Feng Shui could change their positions to suit her whim. But in early January 2021 this is their location.

No 1 –  A Japanese print on silk.  Simple but lovely which just appeared in the house one day many years ago.  Depicting little birds and boughs. 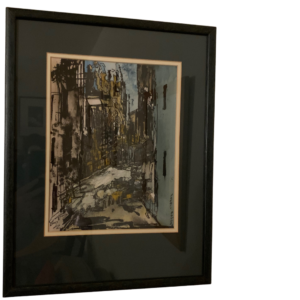 No 2 –  A  Padraic Potter piece entitled “Abandoned”.  Padraic is a lovely man who lives in Sligo and is or was a member of the Jazz Lads, a Sligo jazz ensemble that I have often seen on their tours round Connaught.  Padraic is a life time musician playing saxophone and clarinet in bands for 60 years.  The Jazz Lads must be the oldest jazz band in the world.  Their entry level suggests 75 years of age at least.  This piece is typical Potter featuring a bleak and tumbledown street in mainly watercolour.  I bought this at Boyle Arts Festival in about 2007.

No 3 – A collection of four family photographs taken by a local photographer in Chorlton, Manchester when my family was nearly finished.  Poor old young Paul was still a glint in my eye and a worry on Helen’s horizon.  The photographs from 1985-1989.  The photographer was a little old man living in a down at heel Victorian terrace a little reminiscent of the artist L S Lowry.

No 4 – Another typical Padraic Potter creation entitled “Ghetto” again bought at the Boyle Arts Festival in about 2008. 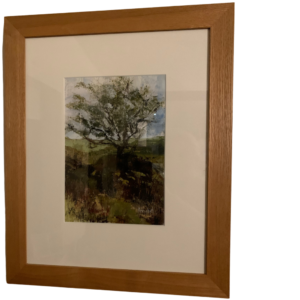 No 5 – This is an Annabel Langrish oil entitled “One Thorn – Carrowkeel.  Carrowkeel is an ancient place on the Bricklieves, north of Boyle on the Sligo road where the dead of 4000 years ago were buried.  Annabel was one of my favourite local artists.  Looking closely at the painting you can detect Annabel’s unique style in this genre.  She used to live in an old farmhouse at Corrigeenroe at the north end of Loch Ce but she moved down to the artist’s paradise of Schull in West Cork some years ago.  Again I bought this in about 2008 at the Boyle Arts Festival.

On a bit of research, I find that Annabel is doing nicely thank you very much.  From Schull, she set up an Arts Studio outside of Kenmare from which emanates all forms of arty form.  She has a team working for her and has opened up a design shop in Kenmare.  She has lots of write-ups from tourist platforms and her and husband Claus are getting it together.  I still think brush and canvas are high in her dreams.  Well done Annabel. 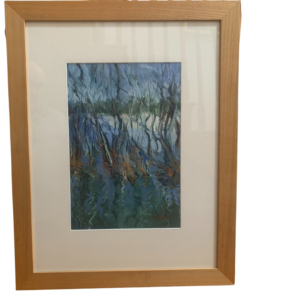 No 6 – Another Annabel Langrish oil entitled “Lough Meelagh 1”.  Lough Meelagh is a  beautiful lake between the villages of Ballyfarnon and Keadue in Roscommon.  The area is renowned for its wildlife.  Recently the old castle on its banks was restored and is known as Kilronan Castle.  Before restoration Helen and myself used to walk its grounds and peer into its cellars.  Paddy Daly, renowned publican of Boyle, now unfortunately dead along with most of my acquaintances, used to talk of its owner living there in reduced circumstances.  Not a pot to piss in but a towering ruin over his head.  The fate of quite a few Ascendency people.  John McGahern in his writing often spoke of this sad cohort.  I bought this in 2008 at the Boyle Arts Festival.  It was in a collection of three but by the time I viewed, this piece had been bought.  I managed to track the purchaser down offered him gelt which as a good Celt he could not turn down and ownership changed hands. 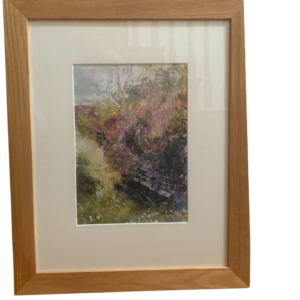 No 7 – Yet another BAF purchase from Annabel Langrish’s local countryside oil genre entitled “Guardian Stone” bought in 2008.  It looks like the fallen standing stone in Thomas Crummy’s field in Tinnacarra just down the hill from the portal tomb across the railway line.  These standing stones have stood as ancient markers for thousands of years but it seems recently as though their useful lives are over. 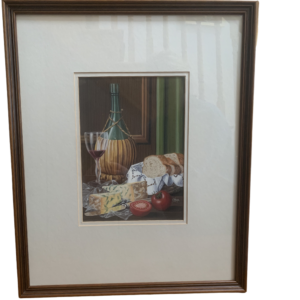 No 8 – This is a still life in gouache and watercolour by Christopher Hope from Shrewsbury entitled “Bread, Cheese and Wine”.  What more do you want?  I bought it years ago whilst driving through the village of Church Stretton in Shropshire one Saturday morning and noticing a sign saying “Art Sale”.  I love the colours and the bread and cheese look as fresh now as on that morning 35 years ago.  The wine is sufficiently aged by now, a Chianti by the look of it.  It hung above my desk for years until recent rhythms moved it.  It is one of my favourites. 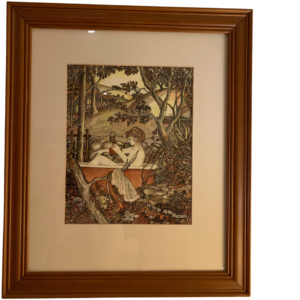 No 9 – A humorous watercolour by Beatrice W Chapleo, an Associate of the Royal Ulster Academy and a Diploma Member of the Ulster Society of Woman Artists who lives in Crossgar in Co Down.  It is entitled “Early One Morning”.  I love the way Beatrice has depicted how this lissom and naked young lady is taking her morning bath in the shadow of the forbidding grey Ulster chapel, cocking a snook at the dour religiosity of Ulster.  Of course no harm to those that live that way. 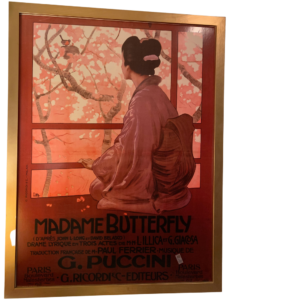 No 10 – This is not an artist’s piece but an old poster advertising a production of Puccini’s opera “Madame Butterfly” in Paris in the early 20th century.  A wonderful opera depicting a man’s inhumanity to a woman.  A story of the human race but set in Japan in the late 19th century.  Daughter No 2 bought it for me in Verona in 2017 when we were present at the arena in Verona for this magnificent performance.  It will live with me forever and it was Helen’s favourite.  Derek Walker of Boyle’s Men’s Shed framed it for me and would not charge me because of its emotional value. 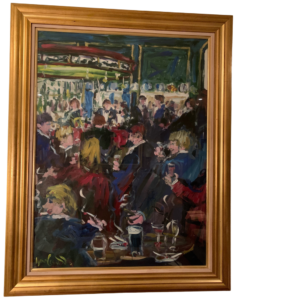 No 11 – A magnificent large and busy oil painting by Marie Carroll of the Side Bar at the Shelburn Hotel before its restoration in the early 20th century.  Marie was a Londoner educated in Art at Goldsmith’s College.  She came to Dublin in the early 1970s and her impressionist style seemed to suit the bustle of Dublin.  Many of her works depicted various aspects of the old Shelburn Hotel and some of her works hang there to this day.  The Side Bar at weekends was the go-to place in the 1980s and 90s where the good, bad and downright smart of Dublin society mixed, danced and smoked away their dreams with each other.  I spent many an electric night in that bar during rugby weekends of that time.  People think I am pictured there on the right near the bottom.  The bar has been long closed and reinvented to suit 20th-century tastes, all to Dublin’s loss.  I bought this painting from the famous Athena Gallery on Dawson Street when I was with Daughter No 3 on a trip to Dublin in 2001.  We lunched in a restaurant up the street that specialised in Graham Knuttel paintings and then carried our purchase across Dublin to Pierce Street station in the pouring rain and caught the Dart to Kilester where I had left my car.  We eventually got it to England still in fine condition.  Sadly Marie Carroll died in 2016 a real loss to the Dublin art world.